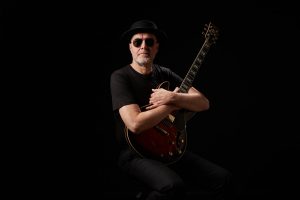 Maciek is a New Zealand guitarist born in Poland. After spending much of his life in London he moved to New Zealand where he lives with his wife. He currently composes and records his own music, produces records for Kiwi artists, plays live music in and around Aotearoa and has performed at several jazz and blues music festivals.

Maciek’s performance at the Hamilton Gardens Arts Festival led to this 2015 quote from Sam Edwards of Waikato Times: “…delivering a virtuoso and musically informed lesson in guitar”. More recently, in 2020, a review by Mike Alexander (www.muzic.net.nz) described Maciek as having “…a technique and style that’s evocative but understated” with his recent single , Mr Ponsonby having “precise and fluid guitar lines… and a woozy solo that never overplays itself and smooth shifts in time signatures.“

Maciek’s early influence was the “British Invasion” pop music, then he heard Purple Haze by Jimi Hendrix, which provided instant motivation to learn the guitar. Later, Miles Davis and the plethora of electric jazz stars contributed further highs of musical inspiration. More recently, Maciek has been delving into earlier era of blues and jazz as well as listening to various music from around the Globe.